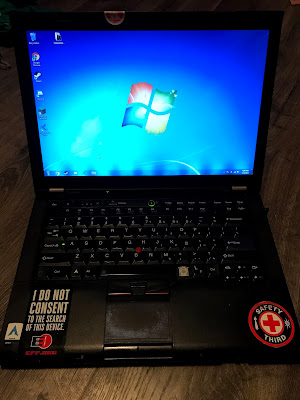 This is a continuation of Creating Windows 10 Boot Media for a Lenovo Thinkpad T410 Using Only a Mac and a Linux Machine. I figured out that Windows 10 isn't supported on the Lenovo Thinkpad T410, so I decided to focus on getting Windows 7 running on it, which is what it came with. I know it's a security risk, but I figured it'd be okay if I locked down the firewall, installed a virus scanner, and limited the apps installed on the machine. There's nothing on this laptop that we can't afford to lose.

Remember, one of my challenges was that the laptop doesn't have a CDROM drive, and I didn't have any installation media at all. I just had a Mac to work with.

At this point, I had Windows 7 running. However, I was missing key drivers, including the drivers necessary to get an internet connection. Bear in mind, I don't spend a lot of time on Windows. This was my first foray into what I knew was called "driver hell". I was really hoping to get WiFi working so I wouldn't have to keep downloading things on my Mac and transferring them to the Lenovo laptop using a USB thumb drive.

I bought this laptop off a buddy for $200. It was very old, but it had 8 GB of RAM and an SSD drive. It runs Ubuntu reasonably well. However, I thought installing Windows 7 would let my son run a few things he wanted to run that only ran on Windows. I figured the original video card driver for Windows 7 would run better than the one for Linux. He said that Minecraft is actually running more smoothly on Ubuntu. C'est la vie.

At the end of the day, it just wasn't worth my time. I should have paid more for a newer machine. Obviously, dealing with Macs is easier because you're less likely to end up in driver hell, but installing Windows without having access to the OEM ISO is a particularly frustrating experience.

It's done, but I feel a bit guilty that I could have spent those 3 days actually engaged with my 8 kids. A few days later, I was about to play around with installing Arch Linux in a VM. I decided, "Nope. I have better things to do with my time."