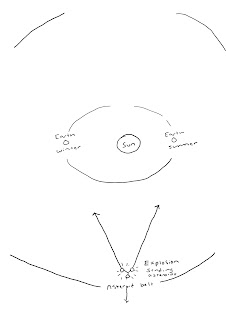 Disclaimer: I don't even pretend to know what the heck I'm talking about. Feel free to ignore this post.

I've been thinking lately about efficient ways to mine the asteroid belt. My guess is that there's a lot of useful raw materials out there, but getting them back to earth is kind of a challenge.

Now, in my thinking, I'm presupposing that we have a working space elevator. Nonetheless, it's still a challenge because the asteroid belt is so far from Earth's orbit. It would take a lot of time and energy to travel there and back in order to gather materials. Certainly, we'd need some robotic help.

However, the distance (and time involved) becomes less of an issue once you have a system in place. To use an analogy, selling whiskey that's been aged for 10 years is only difficult when you're waiting for those first 10 years to pass. After that, there's always another batch about ready to be sold.

One problem is that it would take a lot of energy to move large amounts of raw materials back toward earth. Inertia sucks when you're trying to move heavy things. Furthermore, you have to somehow transport that energy all the way out there. Sure, a space elevator might help you get things off the surface, but the asteroid belt is still a long way away.

Next up, consider that it would be useful to push the material toward a position near Earth's orbit so that it can be captured and brought down to the surface. Hopefully, we won't mess this part up and doom humankind to the same fate as the dinosaurs ;)

I was thinking of creating three bundles of raw materials at a time and then using a contraption between the three bundles to send the three bundles in different directions. By varying the angles and the relative weights of the bundles, you could slightly vary the speeds. The contraption might look like a triangle with a piston on each side. I'm not sure what is the best way of causing the pistons to move.

However, one good thing is that you'd be able to reuse the contraption over and over again. Only the raw materials would move. The contraption would stay in place to be reused.

It would probably make sense for bundles headed toward earth to have some sort of propulsion and positioning mechanism. The contraption that I mentioned above is only there for initial launch.

jjinux said…
By the way, my wife insisted that the bundles would need some sort of propulsion system and a positioning system after the initial launch. I think she's probably right.

jjinux said…
Sam, thanks for the reminder! I'm amazed you still read my blog! I didn't think I had any readers left.
6:12 PM