I've been really busy over the last six months or so: 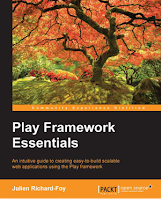 First, I was a technical editor for Play Framework Essentials. It's a fun book because every example is first shown in Scala and then in Java, which makes it kind of a Rosetta Stone for the two languages.

Then, I was a technical editor for Learning Scala. That was a great book! Jason did a great job making a really complex language very approachable. This wasn't the first book I've read on Scala, but it's certainly one of my favorites!

Finally, I took Martin Odersky's class on Coursera, Functional Programming Principles in Scala. I really liked that as well because it gave me a much stronger grasp of functional programming fundamentals. Furthermore, I participated in a study group at Twitter, which made the whole experience much more rewarding.

My hope is that I'll get to the point where I can teach a few Scala classes at work. Hence, I've been working my butt off two hours a day on BART and a couple hours on Saturdays in order to get up to speed with Scala. I still haven't written anything large, but at least I'm feeling a lot more comfortable with it these days.