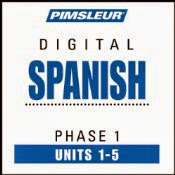 I just finished Pimsleur Spanish phases 1-3 which I bought on audible.com. In short, I thought they were fantastic!

Each phase consists of 30 units, each about 30 minutes long. Hence, I did 90 units altogether. That sounds like a lot, but I did almost all of them while driving to and from work when I worked in Mountain View. I streamed them from my phone through my stereo using bluetooth.

Before I started, I already had a decent grasp of Spanish. However, I started Pimsleur Spanish from scratch. I'm normally a very visual learner, and Spanish is a pretty easy language to learn visually since it's so phonetic. However, I needed something to do while driving upwards of three hours a day, and this fit the bill. I really like how conversational it is. It constantly pushes you to say new things in new situations using your existing knowledge of vocabulary and grammar.

I know that some people have said that they thought Pimsleur Spanish was a little boring compared to Rosetta Stone. However, Rosetta Stone requires you to be in front of a computer, and I needed something that I could do while driving. By the way, I recommend only attempting this on long, fairly boring freeway trips. It takes up a little too much mental bandwidth to attempt on city streets.

After studying Spanish for several months, I was able to give a technical talk in Spanish in Mexico City. Doing the talk live was terrifying, and I'll admit that my voice was shaking quite a bit. However, later I did a screencast of it, Esto es Dart. That went pretty well.

Updated: I had to disable comments because this blog post was getting too many spammy comments.