Dart on a Chromebook: Success! 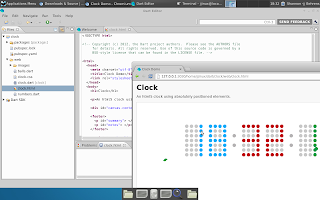 I finally have a viable approach to editing Dart directly on a Chromebook running ChromeOS! The usual approach to developing Dart code on a Chromebook is to use Chrome Remote Desktop to connect to another development machine. However, I wanted an approach that would let me develop in Dart while offline, for instance if I'm giving a talk on Dart and my internet connection goes down.

Crouton is a set of scripts based around debootstrap that bundle up into an easy-to-use, Chromium OS-centric Ubuntu chroot generator. Using Crouton, I was able to create a chroot running a basic Ubuntu setup. Within the chroot, I was able to install a JDK and then Dart Editor. Everything works, as you can see in the picture. I can switch back and forth between XFCE and ChromeOS's desktop using a key combination, and everything still runs at native speed since it's just a simple chroot.

I'm pretty excited that this works because this is one of the few things that was preventing me from fully switching to a Chromebook :) Now, all I need to do is get my hands on a Chromebook Pixel!

lch said…
Sweet! This makes the chromebook pixel viables as my next machine :)
12:14 AM

Unknown said…
Nice! I got it working too using a similar technique :)

The main issue with it on the Pixel -- the high DPI of the retina display makes most of the Linux desktops look really bad (very tiny!). You can fix the fonts, but I haven't found anything yet to uniformly scale the UI.
11:24 AM

jjinux said…
Good tip, thanks. Have you gotten copy-and-paste to work between the two desktops? I've gotten to a point where I have a proof-of-concept working, but I haven't gotten to the point where it's a really enjoyable setup.
4:15 PM

Unknown said…
Hi shannon ! I am trying to do the same thing on my new chromebook since 2 days but no results. Can you tell us about the way to install Dart editor on linux xfce with crouton please ?
I am a student trying to lurn Dart but i'm not an expert on linux :(
3:17 PM

jjinux said…
David, make sure you have an Intel-based Chromebook. It won't work on ARM.

Make sure you're on the Linux side of Crouton.

Then, install the JDK.

Actually, once you get Crouton installed, it's pretty much the same as installing Dart Editor on any other Linux.

Sorry, I can't give you exact instructions. I don't have a Chromebook anymore.
3:31 PM

Unknown said…
OK Thank you Shannon i wil try it right now and let you know how is it going !
5:58 PM

Unknown said…
crouton xfce on acer won't open zips from dartlang.org download.. i'll post my fails/success until it works.. that way if anyone comes here they can stop looking :D
9:57 AM

jjinux said…
Peter, it sounds like you're at the point where it has less to do with the Chromebook and more to do with basic Linux usage. Find a buddy who knows Linux, and I bet he can help you!

For instance, to open up zips without using a GUI, install unzip: