Books: Memoirs Found in a Bathtub 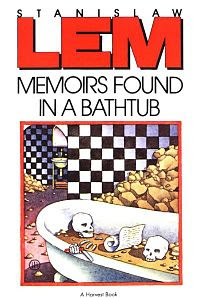 I just finished listening to Memoirs Found in a Bathtub by Stanislaw Lem. It was recommended to me by someone long ago, but I can't remember who. All I can say is WTF!?! Fortunately, Wikipedia has a better summary:

Set in the distant future, Memoirs Found in a Bathtub is the horrifying first-hand account of a bureaucratic agent trapped deep within the subterranean bowels of a vast underground military complex. In a Kafkaesque maelstrom of terrifying confusion and utter insanity, this man must attempt to follow his mission directives of conducting an "on-the-spot investigation. Verify. Search. Destroy. Incite. Inform. Over and out. On the nth day nth hour sector n subsector n rendezvous with N."

The narrator inhabits a paranoid dystopia where nothing is as it seems, chaos seems to rule all events, and everyone is deeply suspicious of everyone else. In danger of losing his mind, the protagonist starts keeping a diary, and it is this diary which details only a few days in his life that is ultimately found by a future society and given the title Notes from the Neogene. Memoirs Found in a Bathtub is this distant voice from the past, this Notes from the Neogene.

Here's a quote from the book:

Anonymous said…
Yep, some image of socialism. I lived in that country in that time and... still live :)
1:55 PM

Anonymous said…
The audiobook is missing the introduction... which explains the how the memoirs were found. It's inexcusable they left it out.

Plus, it's actually about late-era capitalism. Read the introduction if you can and it will all make sense.
12:43 PM

jjinux said…
That makes so much more sense. I can't believe they left out the introduction! It would have been so much better if they had included it!
2:52 PM