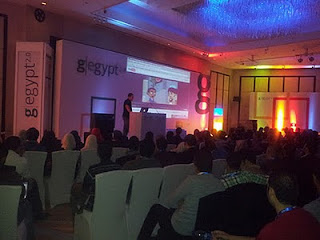 I gave a talk called YouTube for Your Business at g|egypt 2.0.

The talk went very well. There were about 200 people in the audience (and almost 900 in total at the event), which is a great turnout for a YouTube API talk. People asked me questions for about an hour afterwards. I even created a video for the talk:

I was really worried that I would lose my voice during the talk. It's very crackly right now.

Since this is the first time I've visited the middle east, I'm suffering a little from culture shock. I forgot to remove a beer joke from one of my slides. It took me a few seconds to realize why people weren't laughing. What's really funny is that I don't even drink!

I was very amazed by a few things. There were a lot of women at the event. There are far more female programmers in Egypt then there are in the US, as far as I can tell. The next thing that surprised me was that almost everyone here uses Windows--even on the server side. That's certainly not the case in the San Francisco Bay Area. At all the companies I've worked at recently, people tended to use Apple laptops and Linux on the servers. The last thing that surprised me was how many people wanted to have their picture taken with me. For about two hours, I felt like a total rock star ;)

I have a talk on Dart tomorrow and a talk on Python the next day. Let's hope my voice holds up ;)

Thanks go to Mohamed Naguib for taking the picture.

Omar Alqady said…
I attended your DART talk yesterday, it was a great intro :) I noticed the Windows thing here a while ago as well, and it's not just Windows, it's the same with SQL Server vs. MySQL, C# vs. Java, etc... It's like they're paid by Microsoft to use these products not the other way around! One would think it would be the other way around especially with startups, but it's not. It doesn't make any sense :) Anyway, thanks for the talk and for confirming my thoughts about this weird Windows thing in Egypt :)
9:09 AM

R-H-S said…
people in egypt didn't use apple cause it's quite expensive to effort
so they use windows and linux
>>>
i talked to you in the third day
it was nice to talk to you :)
5:58 AM

Yes, Apple is very expensive, but I'm still surprised that people don't use Linux more than Windows. I thought that a country like Egypt would always use Linux on the server, and that 1/2 of developers would use Linux on the desktop. Maybe Windows has better internationalization.
12:40 PM