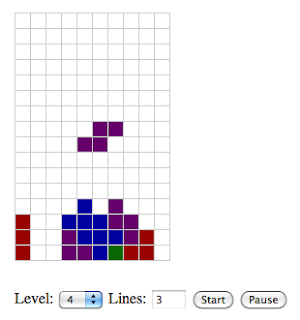 For my first Dart program, I decided to implement Tetris. I was inspired by Alexei Kourbatov at javascripter.net which contains an implementation of Tetris he wrote way back in 1999!

You can play my version here. The source code is here.

Overall, I like Dart. The Dart version of my code is about the same length as the JavaScript version of my code (the Dart version is slightly longer because I switched from using innerHTML to using the DOM). The combination of the optional static typing and Dart Editor helped me avoid many, many bugs. I'm still a Python guy at heart, but my experience with Dart was a very pleasant one.

I jotted down some lessons I learned. Warning: This is my first Dart program, and I haven't even read the tutorial yet, so I could be missing the boat on some of these points!

Don't try to play with DOM elements before the DOM is loaded. The easiest way to achieve this is to import your Dart-compiled JavaScript at the bottom of the page.

Dart has generics. This is a little unfamiliar for a scripting guy like me.

I had a hard time finding methods like JavaScript's Math.abs and Math.floor. They're now members of num.

This is how you add to the DOM:Using innerHTML works too, but I suspect it's frowned upon.

DOM manipulation isn't as easy as using innerHTML. It's not quite as horrible as I feared, but it's still a pain in the butt.

Sometimes you need to use a temporary variable to help out the type system. If you write:it'll say "'src' is not a member of Element." However, you can easily fix this by writing:Translating from JavaScript to well-typed Dart is a linearly time-consuming, but relatively straightforward progress.

The intelligent code completion in Dart Editor was really helpful since I don't really know the language or its APIs. I can edit text a lot faster in Vim, but code completion helps me know what to write.

Trying to figure out the proper way to handle keyboard events in Dart is hard because of the DOM. I'm looking at developer.mozilla.org/en/DOM/KeyboardEvent, and it looks like there are two ways to do things, the deprecated way, and the way that isn't implemented yet.

Command-g is the usual Apple shortcut to find the next occurrence of something, but it doesn't work in Dart Editor.

They're working on a new DOM API. I've decided not to use it until they say it's stable.

Brandon Donnelson said…
I like the insight you shared about Dart. Thanks.
9:44 AM

jjinux said…
Moved the code to a new repository. Updated the links. Many changes have been made since originally posting this.
2:32 PM