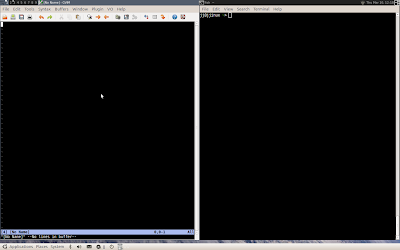 Getting NetBeans to work well took even more work, and even now it sometimes freezes in predictable (and avoidable) ways. I had to "sudo apt-get install suckless-tools", and then I added "xterm -e wmname LG3D" to my startup applications (i.e. my GNOME session). Finally, I switched to JDK 1.7.0 and edited /usr/local/netbeans-6.9.1/etc/netbeans.conf so that "netbeans_jdkhome="/usr/local/jdk-1.7.0".

Since Awesome and GNOME each have their own panels, I did some tweaking to make them get along better. I have Awesome's panel on the top, and one GNOME panel on the bottom. I got rid of things from the GNOME panel that were already provided by the Awesome panel. I'm pretty pleased with the result, and I didn't even have to futz with any configuration files to do it.

I really like the keybindings in Awesome. Since I had already played with xmonad and dwm, I didn't really have to re-learn the keybindings for Awesome since they're so similar. I just had to realize that all the keys were based on the command key (i.e. Mod4) instead of the control key.

I especially like having a different set of tags (i.e. virtual desktops) per monitor. That's exactly the paradigm I like the most. I use a big monitor for most things, and I use a lot of different tags. I use my laptop screen just for instant messaging applications, and I only use a single tag.

I have found one Awesome bug. When I first login, my cursor is a clock, and it doesn't go away. If I play with the menus, it does. It's not a big deal, so I don't care.

The default layout is floating, and each tag has its own layout. This default works well for me. I only have to press Command-space to switch to tiling.

One of these days, I might give Qtile a try since it's written in Python and my buddy really likes it. However, in the meantime, I'm pretty happy with Awesome.

matt harrison said…
You know you want to give qtile a try. Eventually you will want to hack on your tiling wm....

WRT dual monitor support. Doesn't nvidia support xrandr? If I recall detaching worked on my intel gpu (or only required restarting awesome (which was a key binding)). Annoying to have to restart X. Qtile currently requires a restart with that but hopefully it will soon listen to xrandr events...
10:39 PM

NVIDIA works. Awesome works. I just find it easier to log out and back in again rather than a) configuring NVIDIA via its GUI b) restarting Awesome c) shuffling all my windows around.
8:39 PM

matt harrison said…
if xrandr works, then it seems like it would be easier with one command, rather than logging out, restarting apps, etc.

I've got a command called monitor_off.sh (ie turn off external monitor) that has the following in it:

In my awesome days, I just needed to run that and I was good to go.

If you want a really slick looking GVim window, add these lines to your .gvimrc :

After that it looks a lot more like vim in a terminal.
3:13 AM

jjinux said…
> If you want a really slick looking GVim window, add these lines to your .gvimrc

jjinux said…
> if xrandr works, then it seems like it would be easier with one command, rather than logging out, restarting apps, etc.