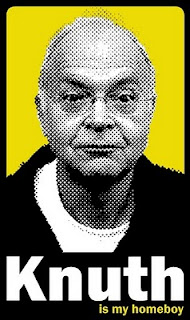 At the age of two, Donald Knuth implemented Conway's Game of Life on Babbage's difference engine which was pretty impressive since Conway hadn't been born yet...neither had Babbage.

The next version of TeX will be self hosting...and will run on bare metal.

Skynet is actually an out of control TeX macro.

Knuth can store all integers between 0 and 127 in 4 bits.

Chuck Norris is actually an android that Donald Knuth created. He was funded by DARPA.

Knuth once wrote, "Email is a wonderful thing for people whose role in life is to be on top of things. But not for me; my role is to be on the bottom of things." He succeeded.

Knuth started to dabble in botany in his backyard. He gave it up, though, when all his trees ended up with squareroots.

Knuth is the last highlander.

Knuth created the Antikythera device when he was a young lad vacationing in Greece.

When Knuth wants to speed up an algorithm, he doesn't code in assembly--he codes in binary.

Donald Knuth enjoys coding in Python, but he prefers to write the .pyc files directly.

One time Knuth decided to crosscompile his algorithms from binary to quaternary. In the process, he invented DNA.

Knuth's brain is the most powerful source of energy known to man. Unfortunately, harnessing it would destroy mankind.

Knuth invented literate programming so that TeX could be compiled by less capable compilers. Knuth's own compiler compiles the English.

If you can think of more, please leave them in the comments below :)

jjinux said…
Knuth likes to put himself to sleep by calculating the digits of pi...all of them.
10:43 AM

jjinux said…
The NSA has been trying to move away from RSA since it was discovered that Knuth could factor any sized integer...in his head.
10:48 AM

Tristram Brelstaff said…
Beware, I have proved the funniness of this joke but I have not yet tested it out on anyone.
1:39 PM

Philippe said…
This comment has been removed by the author.
4:53 PM

Anonymous said…
Donald Knuth first Christmas was spent arguing with his parents about how to pronounce 'Xmas.'
10:15 PM

Anonymous said…
Knuth is the greatest AND smartest OR maybe NOT
3:39 AM

Nikunj Bhatt said…
Knuth knows what is the "Good Command AND File Name" in DOS!!!
9:13 AM

Rubayeet said…
Knuth can divide by zero!
8:30 AM

jjinux said…
There are only two types of algorithms: ones that are in "The Art of Computer Programming" and ones that Knuth knows about but hasn't yet documented.
12:03 PM

Anonymous said…
PDF was actually created from TEX. Knuth tweaked a few parameters, created an instance of TEX, applied a transformation to make its TEX origins unrecognisable to people who don't understand topology, and secretly sold the result to Adobe.
12:08 PM

jjinux said…
Q. How long does it take Knuth to change a light bulb?

A. Knuth doesn't need light bulbs. He glows in the dark because of spending so much time in front of CRTs.
10:49 AM

jjinux said…
My buddy Tony sent me this comic about Knuth: http://www.tcapp.com/pub/incoming/Knuth_VisualBasic.bmp
10:30 AM

Lucas said…
Knuth's code is so fast that he runs through an infinite loop in five seconds.
11:01 PM

jjinux said…
Literate programming allows you to structure your literate code in such a way that it makes more sense to the reader. In fact, TeX is such a beautiful example of this that if you record yourself reading it out loud and then play the recording backwards, you get "Hamlet" in its entirety.
12:27 PM

jjinux said…
One of the only things that Knuth doesn't know about modern software engineering is how to use a debugger. He's never needed to.
12:29 PM

jjinux said…
Knuth has designed a new encoding for Unicode that can fit all known symbols in a single byte.
12:35 PM

jjinux said…
Never let Donald Knuth sing you the ABCs song. It takes him several hours to get through all of the Unicode character codes...from memory.
8:08 PM

Abhiram said…
Knuth can build Rome in a day
5:55 PM

jjinux said…
Knuth has a new Lisp compiler that can allocate all of the memory required for a Lisp program...statically.
9:14 AM

jjinux said…
Knuth is a fan of Vi, but he never has to go into insert mode. He merely commands his programs into existence.
9:18 AM

jjinux said…
There are a bunch of similar jokes about a famous googler named Jeff Dean: http://www.quora.com/What-are-all-the-Jeff-Dean-facts
6:32 PM

jjinux said…
Did you hear Donald Knuth had 10 kids? Thank God he was counting in binary! #knuth
12:39 PM

jjinux said…
#Knuth came up with with a new protocol for DNS. Inspired by DNS's use of UDP, the new protocol only requires a single packet--in total ;-)
7:41 PM