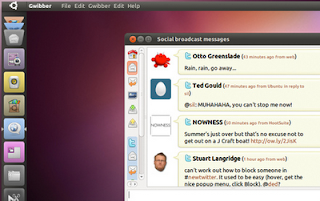 I tried out Unity which is going to be the user interface for Ubuntu 11.04. It's built on top of GNOME, and it's currently used in Ubuntu's Netbook edition. Overall, I liked it. It's definitely one step closer to OS X. For instance, menus are shown at the top of the screen rather than at the top of each window. Unfortunately, I encountered several bugs when trying to use an external monitor, so clearly Canonical's programmers have their work cut out for them to hit Ubuntu's 11.04 release (due in April, of course).

jjinux said…
By the way, if you install and then remove Unity, you may get errors from gvim such as:

This is a bug in one of the Debian packages. To fix it:

dan aronson said…
cool, so soon you'll be able to have a desktop like osx on ubuntu running on your macbook?

jjinux said…
> cool, so soon you'll be able to have a desktop like osx on ubuntu running on your macbook?

Yep, and I'll have the source code too ;)