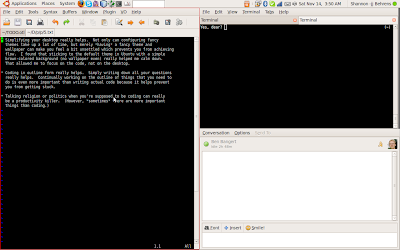 xmonad is a tiling window manager. If you don't know what I'm talking about, take a peek at one of the screencasts. I've been using xmonad for the last couple weeks. It's been a couple years since I tried it last, and it's really improved:Every time I try out a tiling window manager, I am reminded of the fact that I fundamentally disagree with the premise:Fortunately, of all the tiling window managers, xmonad is the most understanding of my needs:Hence, xmonad is my favorite among all the tiling window managers that I've tried. There are a couple premises that I fundamentally agree with:That last point is important. There's a great saying in The Myths of Innovation: "Don't worry about people stealing your ideas. If they're any good, you'll have to cram them down people's throats!" Not every new idea is good, but trying out lots of new ideas is very good.

xmonad exemplifies what I'd like to see more of in the Linux world. Linux has always been a little behind in terms of user interface design. Instead of cloning Windows or OS X, I really like the idea of creating our own new, interesting, and clever approaches to user interface design. Do you remember the time when neither Windows nor OS X had virtual desktops? I like having things that those guys don't have, which is why I'm happy to see the innovation that xmonad is providing.

jjinux said…
I blogged about my xmonad setup here: http://jjinux.blogspot.com/2009/11/linux-my-xmonad-setup.html
5:41 AM

Unknown said…
You might want to also look at bluetile http://projects.haskell.org/bluetile/

It's based on xmonad, has GNOME integration out of the box, and window management is possible with the mouse as well as the keyboard.
1:39 PM

Don Stewart said…
@Geoff : note that bluetile is a research fork of xmonad that is being merged in to the main line (the author is an xmonad developer).

creativesumant said…
The xmonad dev team is very proud to announce that the bluetile merge was completed today. The Bluetile branch is an experimental xmo﻿nad variant whose:

focus lies on making the tiling paradigm easily accessible to users coming from traditional window managers by drawing on known conventions and providing both mouse and keyboard access for all features. It also tries to be usable ‘out of the box’, requiring minimal to no configuration in most cases.

Recently I just came across a good article on "Linux"
Here is its link.
1:31 AM