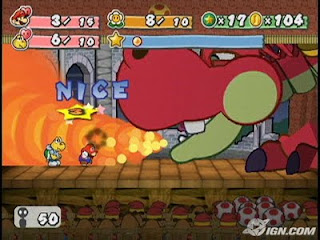 About a year ago, my buddy Ben Bangert gave us his old GameCube. My wife and I really enjoyed playing Paper Mario: The Thousand-Year Door.

"Paper Mario" is a closed source game. I bought it used at my local GameStop. Since I'm a bit of a free software nut, you might wonder how I could live with the thought of playing a closed source game. The fact of the matter is, I don't think "Paper Mario" could be produced in an open source manner. Technically, I'm sure it could, but who would want to? A hundred people or more were involved in producing that game, and what do they get out of it? I wouldn't volunteer on such a project--I have real work to do! If I can't imagine volunteering my time on such a project, then why would I expect anyone else to? Instead, I paid money. I'm happy because I have a fun game to play. The developers are happy because they got paid. Believe it or not, it's a win win situation.

However, I do have enough time to write a small video game. I wrote it in a week with my buddy Adam Ulvi. It's open source. It's based on the open source library, PyGame. I also made use of an open source library called PGU aka "Phil's Game Utilities". Phil wrote PGU while he was writing his own video games. The fact that PyGame is open source has saved me multiple times, since I've often looked at the source code in a pinch.

Now, I'm not trying to say that big projects can't be produced in an open source way. If that were true, Linux wouldn't exist. I'm just saying that I enjoy large closed source games like "Paper Mario: The Thousand-Year Door", and I also enjoy writing small open source games using open source tools like PyGame. My point is, there's room in this world for both!

On a more personal note, I'm coming to the conclusion that I need to just relax. The industry is going to go in whichever direction it's going to go, and there ain't a heck of a lot I can do about it. My best bet is to stay flexible, friendly, and helpful--as usual ;)