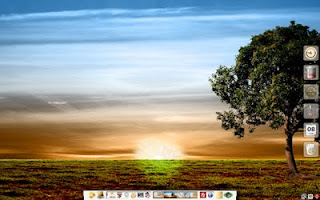 Continuing from my post yesterday, Linux: Open Source and my MacBook, I gave OpenGEU 8.10 a shot under VMware Fusion on my MacBook.

OpenGEU is an Ubuntu-based Linux distribution that uses E17 (aka the unstable version of Enlightenment). The project was started and designed by the Italian artist Luca D.M. (aka TheDarkMaster).

In short, it isn't quite as "cohesive" from a feature point of view as stock Ubuntu, but it's stunningly beautiful and performs a lot better. I gave VMware 780MB of RAM, but it's currently using only half that. It also seems to use a lot less CPU. It's actually tolerable under VMware.

Here are some problems I encountered and the solutions I came up with:

Don't use "Linux Easy Install". VMware claims that it can install the ISO automatically since it's based on Ubuntu. However, this just lead to a blank screen for me.

I told the installer to log me in automatically. Why not? I already have to authenticate with my Mac. This makes booting seem a lot faster.

I had to forcibly restart the virtual machine after installation. It just hung. VMware has done this to me before.

I had some serious dpi problems. This resulted in very large fonts. Thanks to this wonderful page, I was able to fix the problem. I was very happy about that since this problem has always stumped me in the past. I edited /etc/X11/xorg.conf and added the following to the Monitor section, "DisplaySize 338 211 # 1280x800 96dpi".

I tried sharing folders between my host and guest operating system. This worked amazingly well. You can enable it on the fly, aka without rebooting. /mnt/hgfs shows up on the guest OS. The only problem is the same problem you typically get with NFS. If your user ID and group ID are different on your host operating system, the files won't match your username and groupname on your guest operating system. It's possible to hack your away around this problem, but it's still a pain.

I told VMware to "pass power status to the virtual machine", but this led to warnings from OpenGEU.

Since OpenGEU doesn't use much from GNOME, it doesn't run startup tasks. Hence, I had to manually run /usr/bin/vmware-user every time I logged in to let VMware do its thing and fix the resolution. To add insult to injury, this causes one of the panels to end up in the middle of the screen. However, you can right-click on the very edge of it and tell it to restart. This fixes the problem.

As beautiful as OpenGEU is, it still made me miss the fonts on my Mac. I guess I'm spoiled. Furthermore, the screen seems "grainy", and the colors aren't quite perfect. I always complain about that in Linux. I have no clue why Linux running with the right resolution on my Mac under VMware looks slightly off, but normal OS X doesn't. Maybe it has to do with finely tuned gamma correction or anti-aliased graphics or something, I don't know. However, it kind of messes with my obsessive compulsive nature.

Anyway, I want to thank all the Python guys for their comments on my blog yesterday. They made me feel a lot better ;)

BhogiToYogi said…
Hey JJ, Every time I try one of these experiments, I feel like I start off with something very square and I am trying to chisel all the sides to make it round and work and go smooth like a wheel. Talk about reinventing the wheel.
7:13 PM

jjinux said…
Yep, I know how you feel. Of course, have you ever tried to use wagon wheels on a Ferrari?
12:37 AM